Many struggles, one movement

In the face of conquest, Palestinians’ existence is resistance

Ashley was one of two GGJ members who participated in the Grassroots International Travel for Change delegation to Palestine, from October 27-November 6, 2014. Delegates participated in the olive harvest and learned about the struggle of the Palestinian people for self determination and food sovereignty. Stay tuned for a reportback conference call this winter. 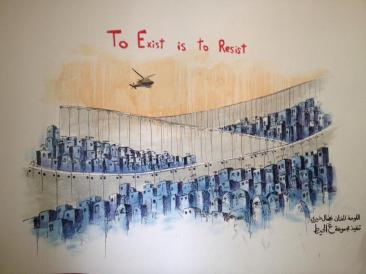 In the face of conquest, Palestinians’ existence is resistance. This was made evident in the 10 days that I spent with the Grassroots International Delegation in Palestine. Below is an explanation of the Israeli occupation through a compilation of Palestinian experiences and resistance focusing on colonial settlement, land grabs, the use of political prisoners to suppress movements through fear, intimidation and dehumanization.

Land Grabs and the Israeli Occupation

As the Israeli Authorities continue on a quest to build an Israeli state, they have used land theft, demolition expansion, and policies of settler colonialism to uproot entire Palestinian families in the West Bank, steal farmland and usurp water supply. A critical component to the Israeli agenda is to use a barrier wall—“apartheid wall” —that surrounds entire villages, isolates others, or threatens to expel villages from their Israeli resident status.

This barrier wall, approved by Israeli Prime Minister Barak in 2000, cuts deep into the West Bank, and will encircle over 1.5 million Palestinian refugees into only 12% of Palestinian in the Gaza Strip and the West Bank. Surrounding the wall are 634 military checkpoints that include trenches, barriers and soldiers to control when community members can enter or leave their communities. Often times, these check points create only one entrance into villages, and if these entrances are shut, it prohibits people who live in those villages from entering, as reported by Stop the Wall. Israel’s strategy to create mass destruction and to end people’s freedom of movement is an effort to imprison the Palestinian minds and bodies and further the Israeli State colonial settlement agenda. The restriction on building new homes prevents people from living in dignity and controlling their growth.

We met a Palestinian liberation fighter who explained his struggle to curb the wall from being built near his home. 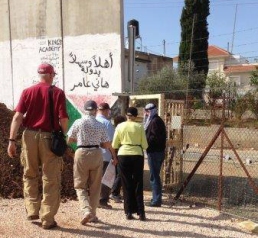 A tall concrete wall garnished with high definition cameras and barb wire, extends across the yard of Mr. Nidal, isolating him from all of his neighbors. This military imposed wall is decorated with a hand painted Palestinian Flag that serves as the welcome sign leading to a locked gate that Mr. Nidal must use to enter his property nestled between his village and the Palestinian occupied Israeli settlement. Mr. Nidal, like many other Palestinians, suffered from the wall being placed in the middle of his property—confiscating land, uprooting trees and crops, and furthering the colonization of the West Bank.

As Mr. Nidal welcomes us to his home, he begins to reflect: “66 years ago my family began this struggle with my grandparents’ home where they would cultivate the land and live peacefully with the world until war and imperialism occupied the country.” The war pushed his family from their land, where his grandfather was killed fleeing to Jordan leaving his grandmother and 5 children without income. Just like his father, he did not have a week of normal life from the day he was born until today. Nidal dropped out of school and has steadfastly worked as a carpenter 20 hours a day. All of the money he made was used to build the homes that were destroyed by the Israeli Authorities, three times, under their court order to confiscate the land.

“Although I bought the land in 1974, the Israeli settlement came in 1978 where I have been battling just to keep what little land that has not been stolen from me. Before the occupation, I had a very profitable store and farm, where I built a greenhouse that cost 300 sheckels but was worth 3 million sheckles to me. The authorities’ act of destroying my home and greenhouse, confiscating my land and attacks on my children is their attempt to make the conditions of our lives so hard that we just leave.”

However, his strength to defend his land and the Palestine prevails over the Israeli Authorities scare tactics:

“I remember the land confiscation order that was given to me when Israeli Authorities wanted to build the wall. The Soldiers planned to put the wall directly at my front door, leaving less than 6 feet from my stairs to the concrete wall. They also imposed a curfew with the wall, to ensure the gate that leads from my village to the stolen land of the Israeli settlement would only be open twice a day for 15 minutes. They wanted me to feel like I was trapped. However, I knew the peak of good faces the peak of evil. We are on the front lines here to face the evil.

“At one point a high ranking solider told me that I should just let them do their job because the bulldozers regardless will plow over my home, but I informed the soldier that every home they demolish is not bulldozing Palestine rather it is bulldozing Israeli. It is exposing the state of Israel and the harms that it is causing to Palestinian communities.” 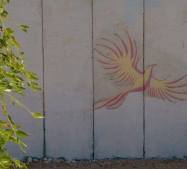 As Mr. Nidal continued to share his stories of resistance, we noticed the newly painted wall was covered with a dove that read “freedom,” while the surrounding area was completely white. When we asked Nidal why the wall looked as if it had been painted over, he responded that the wall was too beautiful. He said that one day he was looking out of his window and realized the hard work of the volunteers who painted the wall, was soothing. This was opposite of everything the wall represented. He said, “I painted over the wall so that I can be reminded that this wall represents colonization and control. Instead of coming to paint beautiful pictures, we must tear the wall down.”

“After months of protest, many arrests of activist and attorneys, and the Israeli Authorities’ attempt to build the wall, my victory is having the wall placed further away from my front door, defeating the curfew and having a key to freely enter the gate to my land and preserved my land. With all the suffering, I can’t help feel a sense of victory when I walk on my land and when I pump water from my well.”

In a continued effort to repress any social uprising by the Palestinian people, the Israeli government employs incarceration, criminalization, and collective punishment to instill fear in the masses and cripple the Palestinian movement. Yet, their determination for liberation only fuels their resistance. The state has used Israeli laws to capture over 6,200 Palestinian political prisoners—500 administrative detainees, 18 women, and 210 youth—by operating under an independent court, soldiers and laws. It is common practice in Palestine for the Israeli state to arrest and detain Palestinians under “Administrative Detention” where they can be held for an indefinite amount of time, ranging from 1-6 months, without the detainee or lawyer knowing why.

Below you will find the testimony of a Freedom Fighter who was captured as a Political Prisoner. This political prisoner from Ramallah, Palestine, whose name I will keep disclosed, is a central component in the ongoing efforts to free political prisoners, free Palestine and to fight against new laws such as the 20 years of imprisonment for throwing stones at Israeli Authorities through the Addameer Prison Support and Human Rights Association.

I was awakened in my home by a resounding noise of sound canons coupled with live ammunition shot through the window next to me. It was 3:00am and I could hear my name being called on a loud speaker “surrender now and come out of your home” but I was physically incapable of moving because rounds of ammunition continued to be shot through the window. Once the bullets and sound canons ended, I thought that my nightmare was over—yet, it was only the beginning. There were laser lights from all directions pointing to my chest and the heart wrenching sound of fear form my mother and wife that loom my home. In my night clothes, I found myself escorted by a solider into a van with my feet bound and eyes covered I could feel boots repeatedly kicking every inch of my body where I would slip in and out of consciousness.

I woke up in an interrogation room with an Israeli Internal Intelligence agent, who would spend three days interrogating me. There were hours that I thought I was living in a completely different world. If I was found sleeping during the interrogation, I would be awakened by a heavy downpour of cold water. This agony ended with me forced into solitary confinement with 18 year old Israeli Soldiers who controlled my body. My only human interaction was with the officers who interrogated me, while I was being held without any charges. These officers would tell me that my house has been demolished and my family was in danger if I didn’t speak, which was a common practice of the Intelligence agency to force political prisoners to confess to crimes they did not commit. Their threats and stories were always met with my silence because my only crime was being a Palestinian.

My cell was my height in length which included a drain on the ground for me to use the restroom. However, this drain will constantly get backed up and once I waited an entire day for the officers to fix the pipes but had to spend the night in the sewage water. What seem to be endless hours and days, left me passing time by picking an argument with the police, counting stones, or talking to creatures that would come from the drain. The loneliness and intentional isolation of each prisoner had us picking fights with the guards just so that when they beat us we could feel human, again.

These conditions would never end because the judges and soldiers around me were all connected so they kept extending my solitary confinement. I decided to go on hunger strike! This was a bond built with the prisoners around me, as we stood in solidarity for our freedom. We would read three books and write reports in two of them and prepare a presentation for the entire group for the other book. The academics in prison would hold classes to teach each prisoner their specialization, be it English or mathematics. This is how I spent my time until I was released four months after being arrested. Now, I am even more committed to make sure every political prisoner is released and returned to their families and the struggle for liberation.

Grassroots Internationalism, No War
← One Struggle: From Burque to the West Bank and Back COP 20: Conference Of Phony climate “solutions” →